A short drive to the backyard... Bangalore to Nandi Hills, Karnataka. 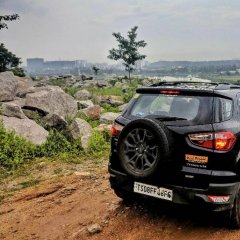